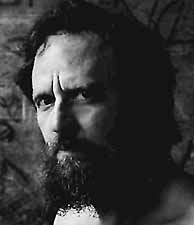 I spent ten years as an art photographer, had numerous exhibits, and sometimes did self portraits. Finally tired of gallery world politics and the limitations of a visual medium, so I returned to my first love, words. Oddly enough, English is my second language, but the one I speak best, thanks to long residence in the US and extensive reading. I was born in Argentina, of a Jewish father and a Catholic Italian mother, which at the time was the equivalent of a racially mixed marriage in the American South. To spice things up a bit, my mother had actually been in the Hitlerjugend in her teens! Needless to say, my family soon found reason to move north; we settled in Los Angeles, and that has been my base of operations since. I found the Los Angeles of the fifties and early sixties to be unutterably banal, but soon discovered that a great deal of the Big World still showed through in the midst of all the stucco and asphalt, partly a result of the propinquity of desert and sea we are famous for, and partly thanks to a 3,000 foot range of hills dividing the town. From liquor stores and traffic jams to birdcalls and rattlesnakes in a fifteen minute walk. The tension between civilization and its supportive natural processes, which most citadins struggle mightily to ignore, has formed the basis for much of my artwork since I was seventeen...

The photos in this essay are best viewed using High Color (16 bit) at 800x600
or greater monitor resolution... but check it out even if you can't do this!