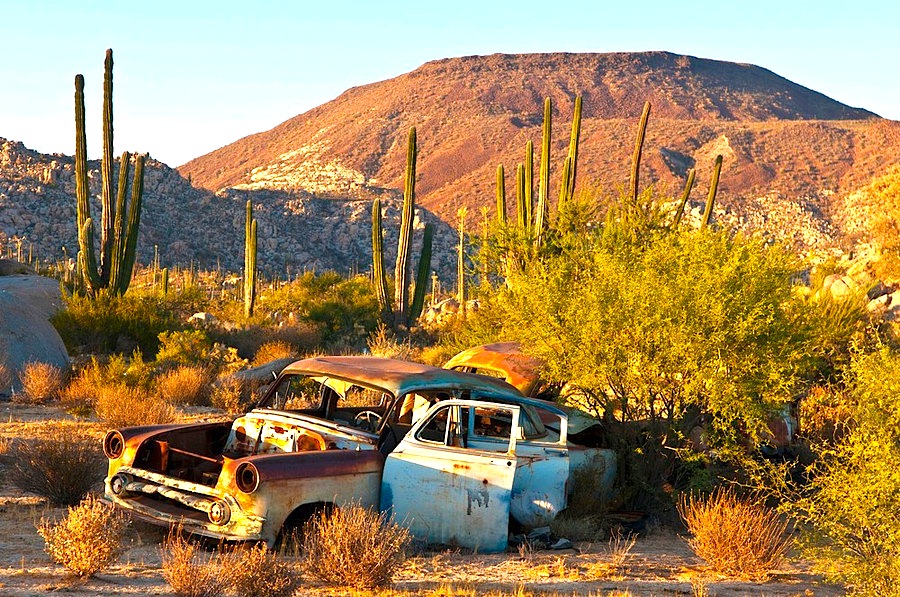 The narrow Baja road begins to wind and undulate once you get past El Rosario, four hours south of Ensenada. It bends away from the coastal shanty dust del norte and rises into the arid desierto alto, one of the few places out west where stars shine free of grid light. We wander the sunken arroyos at night where massive cacti dwarf beast and bone. Towering organ pipes stream starlight onto celestial staves above, as if the cacti emit the stars and night holds the note. Visions such as these draw us into Baja each spring. El sol loco heats the giant beige boulders of Catavina, astride her ancient mule way. Lone super rocks left by glacier or god.

Mirage man appeared by the imaginary puddles del camino. We weren't sure if it was a cactus or un hombre baking at the side of the desert road. He was a barrel of a being, late middle age, cloaked in rag, in clothes so worn they bore the color of dirt. He stood like los saguaros, dead still under the full noon sun, directly opposite the only store for a hundred miles in either direction. We pulled in, and he ambled across the road to greet us, "Hola, hi there, Peso senores, any spare pesos amigos?" At a dozen to a dollar, it was a hard pitch to reject, even harder when you factor in the remoteness and merciless heat of his locale. Who doesn't have a spare peso? And soon enough, he had ours.

My friend and I went into the store and stocked up on cervezas and staples before setting up camp a few miles due east amid the sandy arroyos and boulders and myriad cacti that fill this section of high desert between el Pacifico and el Golfo. El gringo hobo was closer to Eden than most, perhaps a mile away, but his spot on la ruta una was Hell 101, Lucifer's Lycee. If Hell is others, so is the sun, taken at this dose.

We ran into Baja's baked bum each time we went back to the store to stock up. The pitch was always the same "...peso senores..." but the time he took to recognize us fluctuated, from instantly to barely. In addition to pesos, we donated beers and food until we saw him immediately re-donate our extras to the next vehicle that stopped. His only need was "el peso," and given the absence of competition and the decent number of drivers that stopped and donated, he was "potentially" doing quite well. Indeed, el vagabondo was certainly better off than most of the hundred residentes del pueblito de Catavina, though he looked by far the most impoverished in the entire estado de Baja.

He wasn't sure how long he'd been in Mexico or in that particular spot. When I asked la senora, the shopkeeper, about the length of his residence, she said, "Mas o menos cinquo anos," (five years), so someone was keeping score.  Behind all his crust of dust lay a detailed knowledge of films, especially the oldies; he claimed to have had a close relationship with Cheetah from the Tarzan movies. E.g ., Cheetah, allegedly, used to swap seats with him and get him off DUIs back in Beverly Hills ("Yes officer, the chimp can drive!").

He'd also invented every patent going. E.g., shopping trolleys. "You should have seen it before I came up with the trolley, everyone juggling a dozen bags!" Naturally he had pending law suits seeking redress for stolen millions. He peddled road fictions that strayed far from reality, like their inventor.

We gave him a juicy tomato; he held it in his fingerless mittens till it desiccated. The stumblebum was dressed for winter, in two pairs of dark pants and a big black bomber jacket, even though temperatures were in the nineties. He didn't seem to need to eat or drink. His only need was "el peso, just some pesos to get home..." But el desierto was his casa now, he was more cactus than hombre.

La senora said he slept in the burnt out shell of a car half a mile inland from his beg-spot. I imagined that he must have a few stash holes where he stored his takings for his eventual trek al norte. Then I realized, I must not have been the only one who had wondered where all the pesos were hidden! I asked la mujer en la tienda, "Tiene un nombre?" (Does he have a name?)

She laughed, "El Peso!" What else would they have baptized him? The perfect ploy, let "El Peso" beg all day every day, and then each week empty his stash(es); he never gets off the gerbil wheel, and someone in el pueblo pobre gets rico.

El peso also means "weight" in Spanish. What curse was causing el senor's interminable wait? What remote anchor kept him burning, hombre contra sol, out there so long he could no longer trace his source, whence it began, a world without end... su purgatorio Mexicano.

He must have been a legend in the desert, "El banquo vagabondo del desierto—Vag Bank!" I began to wonder if El Peso was real at all. How could any soul stand that heat for so many years? Insanity would help. Or was the uber-hobo a mirage after all, a Mexican "day of the dead" phantasma, el patron santo de spare pesos.