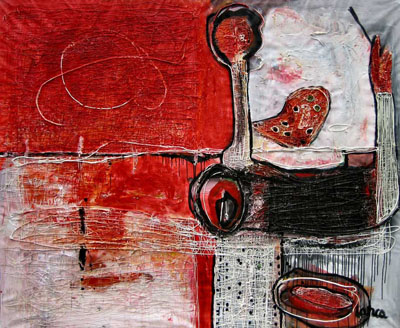 The children don't know what to make of the spinster uncle,
how to interpret the negative space around his muscular frame.
In their confusion they articulate the unspeakable;
they voice the questions that hover nervously everywhere.

With creased brow they dig for origins and evolutions;
they don't understand how this man in apparent good health
has traveled to them alone, devoid of spouse, devoid of brood,
simply (de)void. How is this so? When will it change?

Their mother, jogging between the hallah smoking in the oven,
the gefilte fish still too damp, the soon-to-arrive Sabbath guests,
allows the interrogation to continue, uneasily, out of distraction,
but curious too about where it will all lead.

The children rise to encircle the spinster uncle in dance,
leaving him alone in the neon center.
They frame their questions anew in chant, which becomes accusation,
then declaration: Feter iz a goy! Feter iz a goy!

Incredulous themselves over the coining of their new credo,
but eager for more interactive amusement,
the children scatter to various crevices and caves of the house.
The mother offers the spinster uncle some sponge cake.

Still rooted in the spotlight, he accepts her offering.
When she brings it to him, he mumbles his thanks,
but feeds it instead to the stuffed lion, bear, and monkey,
who have moved closer to him to form a circle of solace.