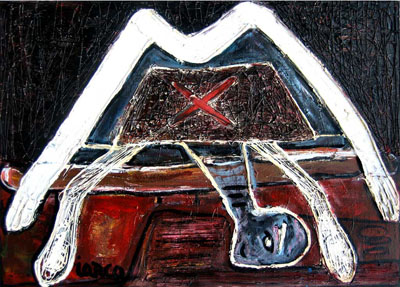 Traveling to Prague has always been a trial. It's hard to put my finger on what it is about the city that rejects me, but I've been there twice, and both trips felt like running a marathon through quicksand. Some places are just like that, and no amount of planning, bribery, or sacrifice will make a shred of difference. I wouldn't mind so much, but Prague is one of the most beautiful, dynamic cities in Europe. I love the history, the music, the architecture, and above all, how much electric potential exists in every moment spent there.

My first attempt started off with an honest mistake, which appeared to be a small hurdle at the time but became a catastrophe in a hurry. I detrained one stop too early in Frankfurt and wound up at the airport when I needed to be in the city center—an easy mistake to make. I looked up, saw "Frankfurt," and got off. The next hour was spent wandering around a deserted airport at midnight, looking for someone kind enough to direct me to my platform.

In general, the Germans are a kind people. The time that I spent in Berlin was magnificent, and a lot of the reason for that was the spotless hospitality offered by the locals. The difference between my lovely stay in Berlin and my experience in Frankfurt was intention. I actually wanted to be in Berlin—nobody wants to be in Frankfurt. The folks that I came across in the airport that night could smell my distaste, and they didn't like it.

Another relevant detail concerning the Germans that I have met is their love of procedure. Everything in that country is done in its proper order, and for the most part it works magnificently. So when I asked for directions, process dictated that it was first necessary to ascertain the reason for my confusion. Every pilot, passenger, and police officer I spoke to conducted a thorough interrogation before making any effort to help. They needed to know exactly how badly I had fucked up and precisely how deep my ignorance ran, before they would deign to give me directions. Apparently my explanation was insufficient, as the locals simply scowled and walked wordlessly away, leaving me with no alternative but to wander further into my labyrinth.

I ran circles around that airport, desperately wishing for someone to take my hand and lead me to salvation. This was the wrong place for that. While the people of the Fatherland may be hospitable, they are not charitable. I've found that if I can maintain a mirage of control, Germany will carry me on its back, but when I've shown the least bit of fear, I've been eaten raw, screaming breathless pleas for mercy as hope drifts into the gutter and out of memory.

It took speaking with four uniformed strangers to get to where I was going. That means four "Excuse me, do you speak English?" conversations in German with people who took their jobs very seriously. It must have been outside of their job description and thus completely impossible to give directions. All they were giving out were stares of deep condescension and lectures on proper transit.

Eventually I was herded to a bus that meandered through red-roofed suburbs and into the stone, glass, and neon of the city center, finally docking with Frankfurt Main train station. The gentleman assigned my case at the ticket window was fully within his power and title, and thus extremely helpful and concerned. My new ticket was negotiated in a matter of five minutes. Unfortunately, that was precisely two minutes after the nonstop train to Prague departed. The schedule I was now in for involved seven transfers between the hours of 03:00 and 07:00, arriving at 07:30. It was going to be a long morning.

The man I am today would have called the night a loss, found a nearby hotel, and snoozed the whole troublesome experience away; mucking about in train stations in the middle of the night does nobody any good. Even so, had someone taken the time to explain how irrational I was being, I don't think it would have gotten through. I had decided that I was getting to Prague that night, goddamn it, and nothing could stop me. When I get on the warpath, reason, logic, and common sense take a holiday, and that night in Frankfurt was no exception.

The three hours between 24:00 and 03:00 stand out in my memory as the first time that I was too tired to be frightened. I had planted myself on a bench at the platform, cocooned in a trench coat, shoulder bag clutched to an empty stomach, beaten feet straddling my backpack like a wounded turtle guarding its shell against the night. The bench was illuminated by a pale yellow lamp, giving my isolation a tint of vulnerability, inviting anyone with a pistol and a plan to take a crack at the easiest mark in town. Fear would have only been natural, but I was too worn out to feel it.

When exhaustion is real, there is nothing else. I could trick my body into motion, but my mind was fully devoted to staying awake. I felt a warm breath washing the backs of my eyes, pulling them closed. I began toying with the elasticity of my lashes, depending on their spring to bounce the lids back up; the dirt in the air was all that kept me awake, as it caked the edges of my nostrils, inspiring my hand to rub the tip of my nose, the cool leather glove bringing the scent of tobacco mingled with sweat to the void of my mind. When my train arrived, I felt a deceptive wave of relief as the doors opened with a hiss, sending a draft of stale heat past my face and into the night.

Had I known how unlikely it was that I would make all seven of my transfers, I might have been poised to sprint at each stop, composed for action. As it was, I could only hang on as the population of the train shifted from overnight travelers to morning commuters. The sky reddened as I drifted from one station to the next, looking to my tickets at every stop, trying to match the symbols printed there to those outside. Miraculously, I managed to shamble from train to train at the correct times, and it wasn't until around 06:30 that I began to lose control. It was the last leg of my journey and some of the more surreal moments of my life.

My punch-drunk eyes fought a good fight but had to throw in the towel in the final round. They rolled to the 2' x 2' window in my compartment to meditate on the light flickering through the trees. The forest then melted together and slipped away. There was only light, and it was orange and yellow and brilliant and everywhere. The light washed into the train; it bathed everyone with its golden radiance and put reason on hold. The color purple appeared where it wasn't, as a man in a corduroy jacket, holding onto the rail that ran floor-to-ceiling, was blooming into a benevolent woman, clad in fur, alabaster hand clutching a scepter with a blood-red stone the size of my fist. Gold and purple points of light burst around my head as I fell to the floor in a soft mess of legs, arms and peace.

The dull thud of my body collapsing to the patterned rubber mat stole my hallucination away and grounded me in my defeated body. The full weight of the day, the night that followed, and the morning I was now in, landed like a ton of wet cement on my folded shoulders. The other passengers looked at me like I had just burst into flames and then just as suddenly extinguished; their eyes were like lawyers cross-examining my jacket, hat, and shoes for any sign of guilt. I forced myself to look back to the window, freeing me from direct accusation. Slowly, papers unfolded, legs were crossed, and all of us silently agreed that whatever had just happened was beyond any of our control, and thus not worth the time it would take to get to the bottom of it; we had somewhere to be, after all.

When Prague finally snapped into focus, I didn't trust it. The signs matched the tickets all right, but I had been fooled before. Everybody else detrained, but I hesitated. The station was beat to hell and looked more like a flea market than a hub of transport and commerce. Piss-yellow and hot-pink flyers littered plywood shacks selling sweets, cigarettes, and phone cards. The ATM looked like the trunk of a Buick, propped open in a corner and completely unmarked.

Finally, a man shoving a broom through my deserted compartment, beneath a set of eyebrows that could have done the job without him, cursed at me and violently gestured to the door. I set my jaw, hefted my life, and fell into an ocean of humanity whose current swept me feet first into a world that now lives in the finest corner of my memory. Prague rebuilt me. I arrived shattered, and left whole—filled to the brim with thick steaks, vengeful absinthe, and perfect jazz.