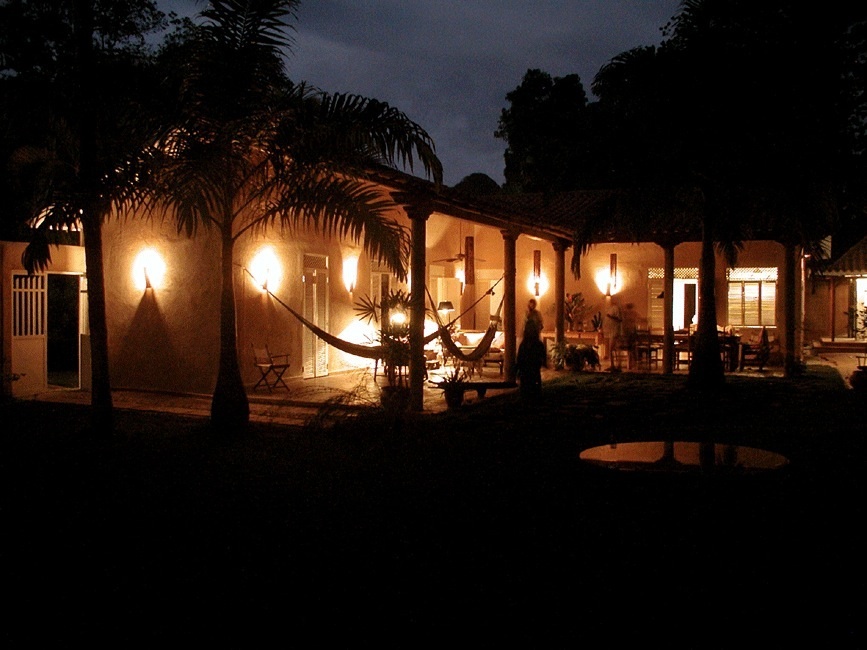 On weekends, friends come from Caracas and we fix each other dinners of sushi, paella, curry and Puerto Rican bacalao. We tell jokes and talk nonsense. And we sit together far into the night, drinking cuba libres by candlelight. We are, in our own ways, all refugees, bound together by some thinly woven web of circumstance.

Fortunato Herrera is a tall, gaunt asthmatic who lives comfortably off a sizable inheritance. His father was a close advisor to the Venezuelan dictator, Perez Jimenez. During the fifties they lived in a huge mansion on the mountain above San Román in Caracas. When the regime fell, his father fled by private plane to the Dominican Republic, pursued by Venezuelan fighters. Trujillo, then the dictator of that "republic," sent out his own escort of fighters to warn the Venezuelans to back off and leave his air space.

Fortunato's father eventually went on to live in Madrid, and Perez Jimenez fled to Miami, where he was ensconced comfortably, protected by people in high places. Or so he believed. But his minister Herrera heard from sources in the Franco government that Jimenez was in danger of being extradited back to Venezuela for trial. Leaving Madrid, he traveled to Canada, slipped across the border into the U.S. through Niagara, and rushed to Miami to warn Jimenez.

"That can't be," Jimenez told him. "My friends will protect me. No, I'm staying here."

Mission accomplished, Herrera went back to Niagara, passed back into Canada and returned to Madrid. Jimenez was extradited and tried in Venezuela.

Meanwhile, young Fortunato was attending a small boarding school in Nyack, New York. One day two nattily dressed FBI men came to the school to arrest this said "Herrera" for extradition. The headmaster, a kind and sensitive man, told them, no, he would not give over an eight-year-old who had been placed into his custody for safekeeping. Unless they could provide him with a letter of intent signed by both parents, they would have to leave. And apparently, even J. Edgar Hoover could see the senselessness of extraditing an eight-year-old.

Even now, Fortunato's eyes moisten when he remembers that headmaster.

"I would like to visit him," he tells me.

"Yes, he found another teacher in bed with his wife and jumped off the Tappanzee Bridge. I mean I would like to visit his grave."

"But did you see your father in those days?"

"Yes, I traveled to Spain from New York on the S. S. Independence." I smile, hearing the name of that grand old cruise ship.

"That's a shame," I say. "I was a glory-hold steward on the Independence in fifty-seven, making crew beds, bussing First-Class Deck Lunch, washing dishes from Cabin-Class Tea. I just missed you. Did you disembark at Algeciras or Barcelona?"

"Yes, the little boats came out at night and passengers went down into them on steep, narrow stairs. We brought their luggage up from the hold and lowered the bags over the side. The harbor at Algeciras didn't allow enough draft for such a big liner."

Fortunato leans back, puffs his cigar, remembering with me the breeze off Africa and the welcoming lights blinking in the harbor.

Juan Tronchoni comes from Spain. A big, smiling insurance man with a booming voice, who greets you with a warm handshake and a great bear hug. A pioneer in Venezuelan spelunking, he was the first man to reach the end of the famous Caves of Guacharo.

His father was a Republican who made films to educate the masses at the beginning of the Spanish Civil War. In 1936, when his son Juan was just five-years-old, he was captured in Valencia by the Nationalists, tortured and executed. Juan and his mother escaped from village to village, foraging for food, barely surviving, until they could flee across the border into France. His mother had an apartment in Paris, which she sold for travel money. As they were leaving one end of the city, the Nazis were entering the other. They fled France on the last voyage of a ship named Cuba, which took them to the Dominican Republic. The Cuba was sunk by German torpedoes on its way back to Europe. In Hispaniola, they were joined by a man named Tronchoni, another Republican fighter who would become Juan's stepfather. After another five years, they relocated to Venezuela.

"Yes, in 1940, when I was four, we were on a Japanese liner called the Brazil Maru, cruising the east coast of South America – Buenos Aires, Montevideo, Rio. At La Guaira we caught a cab up that old winding mountain road to Caracas. I was asleep with my head on my mother's lap and when I woke, I threw up all over her dress. She had to have it washed off by some woman along the way so we could visit the city. A year later the Japanese were putting us into a prison camp in Manila."

"I wonder if you knew Charlie Mock."

"I was pretty young."

"He was my mentor in the insurance business," Juan says. "A very fine, big-hearted fellow."

"Mock. I'm sure my parents must have known him."

"Very impressive. I remember a representative from an important Japanese firm came to our office for a meeting in the late 40s. Stay here, young man, Charlie said to me as the Japanese came in. Ah, Mister Mock, I have heard you spent time in the Philippines, the visitor said, bowing. Yes, Charlie said, I was there before, during and after the Japanese occupation. End of meeting."

We look for his name in my Santo Tomás Internment Camp book. But I can't find him in the long lists of American inmates. Then I look under Los Baños, where many of our fellow prisoners were shipped when Santo Tomás became overcrowded. I run my finger down the line of M's. And, sure enough, there he is: Charles Gordon Mock. For Juan, it's like striking gold.

"That's right, I forgot," he says. "Gordon was his middle name. Charles Gordon Mock." He repeats it softly, several times, as if it has very special meaning.

Arnaldo and Carmen Luisa Piñango are doctors. His family once ran the hacienda at Cepe. Her mother was a well-known Venezuelan author and the Ambassador to Uruguay. She is herself an authority on anticoagulants and has lectured in Asia, Europe, and throughout the Americas. She has shown us pictures of leeches from the Amazon the size of big fish and seemingly benign caterpillars from Brazilian rubber plantations whose little spiny projections cause you to hemorrhage to death.

The Piñangos were attending Columbia University in the early sixties, before those massive protests against the war in Vietnam, the administration and anyone over thirty-years-old.

"We have also known the Japanese," Carmen Luisa says. "Our very best friends at Columbia."

"With a great sense of humor," she adds.

"We went everywhere together. Trying out different restaurants, museums, the theater. We even went all the way to Baltimore just to see the striptease. This is something you don't see everywhere, they told us. And it's true. I have seen it in Hamburg, Germany, also, but it is not the same. For the Germans it is all business. Cold, automatic, like making wurst."

"Even after Columbia, we corresponded with them every year."

"Then one year he wrote that he was coming to Venezuela to see us. We were really excited. We made plans to take them all around Choroní. To Cepe, to Chuao and the pozos along the river. But when they arrived at the airport, he said, no, they had to leave the next day. You've come all this way, we said, surely you must stay and enjoy our beautiful country. I did not come for a vacation, he said. I have cancer. I came just to say goodbye to my dear friends. Now I must go to the United States to say goodbye to others."

For a while we are silent. Then Juan leans far back in his chair and looks up at the stars. Tonight they seem particularly close and bright.

"In Buenos Aires men sit in the bars and talk like this into the night," Fortunato says. "Some are the descendants of Jewish refugees who fled to Argentina to escape the Nazis. Some are the descendants of Nazis who fled to Argentina to avoid prosecution for their crimes. And they sit in the bars there and they drink beer together."

Sometimes, tucked away in our little walled paradise, it's easy to forget that we live on the edge of a jungle.

Tonight we have friends over for dinner. We sit at the edge of the bright pool, sipping whisky and rum. Farolitos gleam among the palm fronds around the wall. I barbecue pork chops to go with Marisol's delicious orange rice and salad. We wash it down with a nice Chilean red. Simple. Civilized.

When the guests leave, Mari goes to bed and I begin shutting down the kitchen, studio, pool pump, front gate, house lights. The cat is looking at something rustling about in a coconut palm. The dogs begin to bark and run around. I glance up to see something fairly large slip down along a frond and fall to the ground, but it is too dark to tell just what it might be.

A possum, I figure, since we have several that like to crawl along our wall and dig among the bushes. I call the dogs off and put them in their pen, finish shutting down the place and go to bed.

Mari and I are just slipping off into a deep sleep. As I stretch out, I reach back onto my pillow and feel something I think for a moment is Mari's hand. But it is too rough, too foreign feeling. So I get up and switch on the light. On the pillow above our heads is an animal about the size of a standard dachshund, light gray and black, but rotund and pug-nosed, with big dark eyes.

"It's a puerco espin," Mari shrieks.

"Nah, it doesn't look like any porcupine," I claim with authority. "No porcupine I've seen. Too light, too furry. Those don't look like spines."

Annoyed by our yelling, the animal lumbers across our bed and jumps to the floor, leaving a trail of quills around the room. I go for a broom and try persuading him (or her, as the case might be) to leave by the bedroom door. He balks however, burying his head under some bags and spraying some foul perfume about, a smell akin to a severe case of unwashed humanity.

I have to admit this must be some kind of cousin to our North American breed. I finally push and poke him reluctantly out the door and he ambles slowly and nonchalantly across our porch and lawn and up our mijao tree, trailing a long prehensile tail.

Mari now reminds me constantly to keep the bedroom door shut. But isn't that part of why we're here, I say, to commune with nature? Like it or not, I think our friend will be around awhile. He feels protected, no doubt, even if not fully appreciated. At night I hear a familiar rustling in the trees.