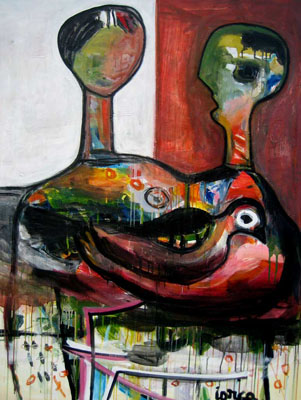 I shared my first kiss with two boys, best friends. It's become a cocktail ditty I've told often, usually at someone else's urging. In the anecdote I've shaped, I sacrificed my virgin lips so two friends wouldn't fight, and I paid the price for my generosity when an elderly neighbor promptly told everyone in my conservative, post-industrial neighborhood.

"I had to get out of there," I've said, my eyelids at half-mast. "When you're spoiled goods at twelve..."

This tale is firmly rooted in the truth. I did kiss one boy, then shortly after, kiss another. They were best friends, it was my first time, and my neighbor stumbled upon us as she walked her four dogs. I shaped the details to create a persona that suits the woman I've become, someone who prefers variety over routine, who answers "both" to either/or questions. The fabrication was gradual rather than deliberate. The version I told in bars became more familiar than the undoctored version buried in memories of an oppressive, old-world upbringing I've long put behind me. It wasn't until I mined this material as a short story—a narrative that required more than a quick, easy laugh between rounds—that I came to understand how far I'd strayed from the truth. Hiding in that "truth" was the struggling, uncertain girl I had been.

I was twelve when my cousin commanded me to kiss her best friend because she was "tired of hearing him moan" about me. We were the two youngest cousins from a large, extended family, and despite my reputation as the family rebel, I was so used to being bossed around that it never occurred to me to refuse her.

My mother—petite, chatty, and charming—was the local beauty. Our neighborhood had been devastated by a wholesale loss of industry and employment, and women like my mother, with her generous smile and flawless skin, were seen as a gift that couldn't be taken away. As her daughter, I attracted a level of attention that was inappropriate for my age, yet I was nothing like my mother in appearance or temperament. My conversational style, when you could force language from me, was best described as sullen. I was too tall, with extreme curves. My mother's esteem fed off attention, but I hated how the men and boys stared. Puberty had changed my body, but I wasn't yet under its hormonal thrall. My cousin and many like her believed I had a duty to perform. If the popular boy liked me, I should be his. To feel otherwise would be—gasp!—selfish, which was the most devastating accusation within my family realm.

I went with my cousin to meet Jack behind the abandoned cardboard factory. We were at that age when we did everything in pairs, and Jack brought his friend Toby along. We had all been in the sandbox together when I passed my mother the dirty syringe that ended our play time in McCarren Park. Kissing Jack was another adult invasion I wanted no part of, but innocence was something I was expected to shed.

Jack swaggered up to me, chest puffed out and arms swinging. He was a boy blessed with physical aptitude and grace, yet he'd never looked more foolish. We were nose to nose, and I laughed.

Jack ran away, my cousin trailing closely behind. Toby pushed me up against the wall. "Don't be this way. He really likes you." I went straight for his ribs, where he was most ticklish, and he darted out of reach.

"You've liked me longer than he has," I said, when he rejoined me.

Toby shrugged, his dark red hair falling into his face as he tried to avoid my eyes. Toby wasn't the boy the other kids feared. He was the boy who helped pick up your books after his friends had tormented you.

I reached out and slowly swept his bangs back into place. He checked behind him for signs of Jack or my cousin before he kissed me. His mouth was warm, and his tongue was slow and gentle. My body wasn't wired to respond yet, but I felt his desire for me in a way that clarified how much potential this kissing business had.

We heard Jack and my cousin kicking cans and joking long before they reached us. Toby slapped a handball around as I casually held up the wall. Jack approached me more cautiously this time, and my cousin raised her fist in warning. Jack kissed aggressively, just like he did everything else.

When it was over, my cousin left the rest of my kissing decisions to me. In the short story I wrote, my character takes back her power after kissing Jack, and firmly refuses to be used or bullied again. This is strictly wish fulfillment. The girl I was turned her anger inward. I might have indulged a complicated, satisfying fantasy of a life unfettered by relations, but I would have kept on kissing on command because I had been taught to obey my family without question. If my desires diverged from the will of my family's, then my desires must be at fault. It would take another decade to permanently put those beliefs behind me.

My neighbor told my father about both kisses, but he believed me when I said it wasn't my idea. He even smiled when I told him I preferred the sweet boy over the rough, popular one. My father was terminally ill, although I didn't know this. At the time, I was too mortified to realize the conversation lightened his mood. His last words to me were about trusting my own good sense.

At my father's request, my gossipy neighbor kept my secret to spare my mother further pain, but she never spoke to me directly again. I made her the villain of the anecdote I told at parties because she shunned me in silent, lasting fury. She never spoke the words, but she clearly believed I was spoiled goods at age twelve.

Jack never approached me again. A few years later, as he waited to take my cousin to her senior prom, he admitted that night had been his first kiss, too. I didn't correct him. That had been the night of my first kiss. As for Toby, whose lips were the first to touch mine, that secret transformed us into awkward strangers. I never admitted I liked him, although he remained the only neighborhood boy that interested me, with his persistent kindness and formal manners instilled by the grandmother who raised him. He might not suit the stock rebel figure, but shunning violence and using ma'am, please, and thank you were radical acts of individuality in the land of Yo! Make me! and all the colorful variations of Don't make me go ___ all over your ass! that began in grade school. I was the rebel child, the girl with too many questions and opinions, yet I lacked the courage to admire him openly, to risk hearing, "You like him?"

I still have a weakness for men with unruly, dark red hair, as if they are all steeped in stolen kisses and covert acts of rebellion. I can see Toby's influence at work in the men I've been seriously involved with, an eclectic bunch with only their maverick personalities in common.

My twenty-something self created the cocktail ditty to impress and intimidate, to give form to the dynamic woman I desired to be. I recast adolescent me because I wanted no part of the fool who struggled with such basic freedoms as the choice of when and whom to kiss. Even now, when I can acknowledge and embrace those struggles, I made adolescent me a character capable of a strength that eluded me at her age. In this, I hope I am honoring the larger truths of my time and circumstances, because in every incarnation of this event—real and imagined—adolescent me seized opportunities and battled expectations. Without that effort there would be no me, at liberty to kiss and do as I choose, in tandem and otherwise.