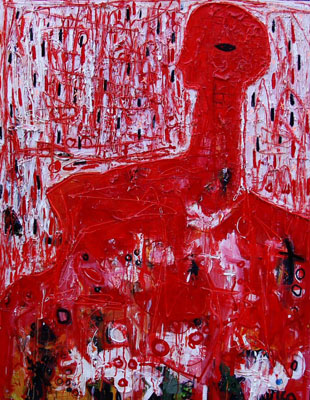 You believed the dying revealed old
secrets, were incapable of retaining anything
for themselves. You imagined
a way to make your wife die more slowly,
so that in the last hour
she could have revealed to you
all she knew about the world.
Perhaps she would have handed
over a clandestine code
on how to get on with things.
Our dendrites branch out,
trying to touch other dendrites,
seeking with filopodia
fingers, latching on, trying to establish
a strong enough connection
that the brain won't prune back and destroy.
This is the way it is with people all over the world.
The coming together, the reaching out,
the touch, the massaging and messaging.
The severing.
You stand there against the sink,
pressing your eyebrows.
The neurons hiss and pop as they reach suicide.
A pop is apoptosis.
And it's your daughter walking down the staircase
with something bleeding in her hands;
no, it is her hands
that are bleeding.